Clements commits to Blaze for the 2017/18 season

Genting Casino Coventry Blaze are pleased to confirm the re-signing of British defenceman David Clements for the 2017/18 Elite League season.

Clements, who began his hockey career in the Coventry youth system before moving to North America, joined the Blaze pro-ranks as part of a two-way deal with the Milton Keynes Lightning in 2015. After impressing at the Elite League level, he quickly accepted the opportunity to join his home-town team on a full-time basis. Playing 41 games, he helped Blaze reach the Playoff final in his debut season.

The past campaign saw the 22-year-old ice 59 times in the Elite League and Challenge Cup, scoring his first goal for the club and adding 4 assists.

At the end of season awards show, Clements was awarded for his superb contribution to the Coventry community, which included a large number of school visits, support of the Coventry Blaze Academy and other work for the Blaze Community Foundation.

Prior to moving back to the UK, Clements played six junior seasons in North America, first in Notre Dame before moving on to Ogden Mustangs where he was made Captain for two seasons and left the club's all-time leading points scorer for a defenceman.

Head Coach Danny Stewart said, “David is a key depth signing for us. He is still young and developing and after getting a full season under his belt, more will be expected from him this season. David has the ability to be a top Brit in this country. His puck movement and hockey sense are very good, and with some fine tuning of the rest of his game, he will be much more effective and consistent.”

David Clements commented, “I am really excited to be back for another year at the Blaze. Coventry is my home town and I love playing in front of our fans at the Skydome. Hopefully this season, we will give them plenty to cheer! I am pushing myself hard this summer, so I'm ready for the big challenge that awaits us.”

Season tickets for the 2017/18 Elite League season are available to purchase at early-bird prices until 28th April 2017. 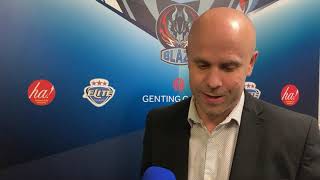